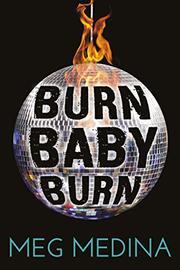 A Cuban-American girl comes of age in Flushing, Queens, in 1977, against the backdrop of the Son of Sam murder spree.

It’s the summer after graduation, and Nora López and her family struggle to make ends meet. She works part time at a local deli, but her mom has her hours cut at the local factory where she works. Her ne’er-do-well brother, Hector, has stopped going to school and instead spends his time doped up selling drugs on the street. Readers can sense the danger growing around him with every menacing flick of his Zippo. Things change, however, when Pablo, a new guy in town, shows up at the deli where Nora works. Their romance makes the summer even hotter even as a serial killer stalks the neighborhoods of Queens, picking off teen girls and their dates in the middle of the night. Rooted firmly in historical events, Medina’s latest offers up a uniquely authentic slice-of-life experience set against a hazy, hot, and dangerous NYC backdrop. Rocky and Donna Summer and the thumping beats of disco, as well as other references from the time, capture the era, while break-ins, fires, shootings, and the infamous blackout bring a harrowing sense of danger and intensity. The story arc is simple, however: a teen girl, her family, her best friend, and her new boyfriend live through a summer of danger.