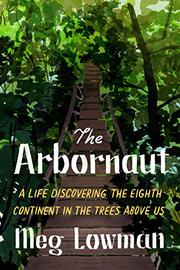 A Life Discovering the Eighth Continent in the Trees Above Us

A riveting memoir from “Canopy Meg,” a pioneer in treetop science.

Lowman, biologist and director of the TREE Foundation, points out that a scientist learning about a tree by studying its trunk makes as much sense as a doctor examining a patient by examining the big toe. But that’s how it was done for centuries. Just as scuba gear inspired more advanced ocean research during the 1950s, ropes and harnesses opened up treetops in the 1980s. Calling forest canopies the eighth continent is no exaggeration. “Upward of half of all terrestrial creatures,” writes Lowman, “live about one hundred feet or more above our heads….Across more than sixty thousand species of trees, nearly every one hosts unique communities.” The author excelled in a discipline in which she was often the only woman and succeeded despite encounters with discouragement and harassment. Obtaining an undergraduate degree in the U.S., a masters in Scotland, and a doctorate in Australia, Lowman plunged into field research, teaching, speaking, and becoming the “mother of canopy research.” Her obsession became foliage—not a gripping subject except in her hands. Part of a complex architecture, leaves on a single tree differ dramatically. Larger and darker lower leaves efficiently use tiny amounts of light that filter down. Top foliage is smaller, thicker, and bright green: a high-powered chlorophyll factory suited to hot, sunny conditions. Eventually, Lowman turned her attention to the universe of largely unknown insects that feed off the leaves. While some publications cite about 5% to 8% annual defoliation, the author discovered that canopies routinely suffer up to 25% damage. Lowman ends her chronological account halfway through, devoting the remainder to lively descriptions of her discoveries, educational activities, and conservation advocacy. With more than 15 billion trees cut down each year and climate change accelerating insect losses, she urges advocates of protecting endangered animals to pay more attention to the destruction of the forests they inhabit.

Solid science combined with a pleasing writing style make for a winning book.