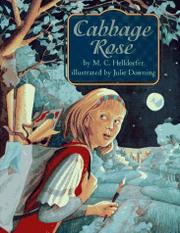 The author of several original tales creates another strong female protagonist: a gifted young artist so plain that her brothers call her ``Cabbage.'' When a passing magician gives her a brush that makes whatever she depicts become real, Cabbage's greedy brothers demand one luxury after another; so Cabbage paints a window, escapes through it, and is soon known for her (magic-free) art and summoned to the palace, where the prince comes to value her for herself (it's he who adds ``Rose'')—as Cabbage realizes only after using the brush, one last time, to paint her mirrored self as conventionally pretty. Helldorfer's conversion of old patterns to new meanings is moderately successful: her intentions are obvious, but the story reads well and the outcome is at least somewhat unforeseen. With sturdy forms and a mannered style, Downing's double-spread watercolors are a little busy but well constructed. Cabbage is more robust than her beautiful alter ego, but not really plain; it's too bad Downing misses the chance to show an ordinary face transformed by a happy smile. A little earnest, but interesting and visually attractive. (Picture book. 4-9)