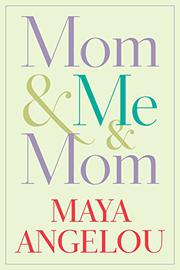 Angelou (Letters to My Daughter, 2008, etc.) has given us the opportunity to read much of her life, but here she unveils her relationship with her mother for the first time.

True to her style, the writing cuts to the chase with compression and simplicity, and there in the background is a calypso smoothness, flurries and showers of musicality between the moments of wickedness. And wickedness abounds, for Angelou had a knack for picking bad men. But the pivot of the book is her mother—first called lady, then mother and finally mom—who sent Angelou and her brother to live with their grandmother when Angelou was 3. By the time her older brother was capable of getting into serious trouble as an independent-minded black man in the American South, they were shipped back to their mother, who was as ready as she would ever be. She had been around, ran a few gambling houses and picked up plenty of worldly wisdom, which she dispensed to Angelou: “Power and determination…[w]ith those two things, you can go anywhere and everywhere”; “If you don’t protect yourself, you look like a fool asking somebody else to protect you.” Though readers may not sense that her mother was not the most reliable force in her life, Angelou knew enough to grab the most from what she had: “[S]he was there with me. She had my back, supported me. This is the role of the mother….She stands between the known and the unknown.” Strung through the narrative are intense episodes in Angelou’s personal progress, from those disappointing-to-terrifying boyfriends, a seriously ugly meeting with her father and stepmother, her days as a prostitute and her incandescent relationships with her brother and her son.

A tightly strung, finely tuned memoir about life with her mother.