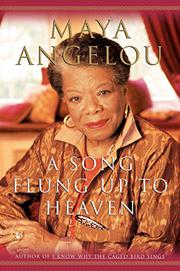 A SONG FLUNG UP TO HEAVEN

The distinguished poet and playwright brings her six-volume cycle of memoirs to a close.

Angelou (Even the Stars Look Lonesome, 1997, etc.) is today among the best-known African-American writers at work—a celebrity, even, thanks to appearances at Bill Clinton’s first inauguration, on Sesame Street, and in various Oprah Winfrey productions. But at the beginning of this slender memoir, written with trademark irony and gentle indignation (“Black females, for the most part, know by the time they are ten years old that the world is not much concerned with the quality of their lives or even their lives at all”), she has yet to attain all that. Instead, in the year 1964, we find Angelou in her late 30s, preparing after four years to leave Ghana and the smooth-talking African who’s been courting her. She’s going home to take on a job as a writer and organizer for Malcolm X. That comes to an end with Malcolm’s assassination, which shakes Angelou to the core: “If a group of racists had waylaid Malcolm, killed him in the dark,” she writes, “I might have accepted his death more easily. But he was killed by black people as he spoke to black people about a better future for black people and in the presence of his family.” Moving back and forth from New York to Los Angeles with stops in between, Angelou spends the ’60s in the company of such leaders and writers as Martin Luther King Jr. and James Baldwin, both of whom she portrays respectfully and affectionately. Along the way, she discovers her voice as a writer. In a nice structural turn, her autobiographical cycle ends where it began, with the first sentence of the now-classic I Know Why the Caged Bird Sings.

Alternately elegiac, meditative, and humorous, a book to savor and remember.