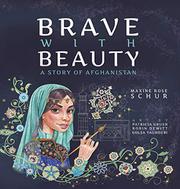 A Story Of Afghanistan

An illustrated profile of an ancient queen.

Seven hundred years ago, a 14-year-old girl named Goharshad married the powerful ruler Shah Rukh and became a queen. After moving to Herat, the stunning seat of her new husband’s empire, Goharshad dreamed of transforming her kingdom into something even more beautiful than it already was. For the rest of her reign, Goharshad funded and oversaw artistic projects ranging from the creation of a mosque to the construction of a library and a college intended to include women and girls. Goharshad persisted despite doubts about her decisions, creating a legacy that lasted until war and time destroyed her most impressive creations. This text-heavy book walks an uncertain line between fiction and nonfiction: Many passages that are presented as facts feel rooted in speculation, such as the musings of an “old man” who gathers the jeweled tiles that are all that remains of a building the queen constructed in Herat. Since the author provides no historical sources, it is hard to say what genre this is meant to be. The unnecessarily flowery language—which is, equally unnecessarily, printed in a stylized typeface—and the highly embellished illustrations are troubling and exoticizing. Furthermore, the tragic tone of the final pages renders this story one of loss, leaving readers with a deficit perspective of a troubled region with a rich and vibrant past. A classroom guide on the publisher's website provides extension activities but no further documentation for the story itself.

An unsuccessful foray into Persian history and legend.