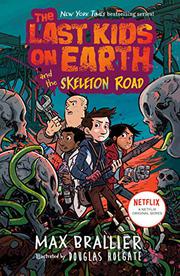 THE LAST KIDS ON EARTH AND THE SKELETON ROAD

From the Last Kids on Earth series, volume 6

The monster-fighting gang from Wakefield departs on a post-apocalyptic road trip.

In this sixth installment of the heavily illustrated, Netflix-adapted series, quirky Jack Sullivan and his friends June, Quint, and Dirk finally leave their creature-ridden town in search of the ultimate baddie, Thrull, who previously deceived them. The quartet takes their tricked-out ride (an armored RV named Bad Mama) onto the open road (with Jack’s Zombie Squad in tow) to find the Outpost, where they believe a certain monster will be able to give them the location of the evil Tower where they believe Thrull now resides. Of course, the journey is littered with all kinds of nightmarish beasts and pitfalls (including an epic water park battle and slime-dripping baby monster), but the kids persist, armed with their endless gadgets and quick thinking. As the group races toward Thrull, the action culminates with an achingly tantalizing cliffhanger; expect audible groans and vociferous demands for the next installment. Fans of this series will revel in this fast-paced escapade with its recognizable black-and-white illustrations and trademark humor. Readers new to the series or those who are only familiar with the animated show may be a bit put off by this later volume that relies heavily on its own language of monsters and weapons. Jack, June, and Dirk are light-skinned; Quint is dark-skinned.

Good fun with a monster of a cliffhanger.