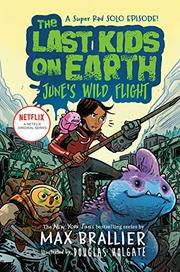 From the Last Kids on Earth series, volume 6

During the middle of an equipment test, the “last kids” of the series title are interrupted by a band of banditlike Rifters chasing a mysterious creature. In the chaos, June’s DoomKart ends up dragged far away before she can liberate herself for a solo adventure—well, almost solo, as cute mascot-type character Globlet joins her. They follow a scream and find the creature, cornered by the Rifters—who plan to take it to Thrull, instrumental in the takeover of the Earth. After a daring, explosive rescue, June realizes the creature’s a baby Winged Wretch—but unlike other Wretches June’s encountered, he’s not evil, so she decides to help him get back to his kind. Along the way, her party is rounded out by comic-relief character Johnny Steve, an “oversized-owl dude” and a self-proclaimed expert on humans with hilariously wrong facts. They face dangerous obstacles and reversals before a strong theme of belonging and interconnection emerges to add heart to the jokes and action, a theme that emphasizes June’s separation from the original cast and harks back to the first book. The art is well integrated into the story, especially helpful in blocking the frequent action sequences. The ending pushes along the series’ overall storyline. June is implied to be Latinx; Quint appears black; Dirk and Jack seem white.

A very funny, solid little side quest with great characters.