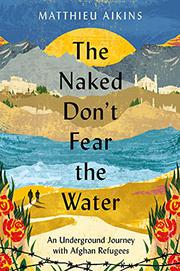 THE NAKED DON'T FEAR THE WATER

An Underground Journey With Afghan Refugees

A Canadian journalist’s riveting account of his travels with a friend attempting to flee from Afghanistan to Europe.

In 2015, Aikins, a winner of the George Polk Award, had been covering the war in Afghanistan for seven years. He spent much of that time with a friend he calls Omar (many names have been changed for safety purposes), who frequently served as his translator. By this point, Omar and the rest of his family had decided to try to leave despite the fact that the borders had been closed. Aikins, who looks “uncannily Afghan: almond eyes, black hair, wiry beard,” decided to accompany Omar, paying his way and reporting on the refugee underground, disguising himself as an Afghan migrant and leaving his passport with friends. What sounded at first like a fairly straightforward plan soon fell apart, as Omar delayed again and again, hoping to arrange a marriage with a young woman, or lost his nerve at crucial moments. Often separated, the two ended up together first in Turkey, then in an internment camp on the Greek island of Lesbos, and then in a “squat” in Athens, where they lived with “a mix of activists and migrants.” Aikins is meticulously aware of the difference in the level of danger the two faced. Though he sometimes thought, “What kind of protagonist was he?” as Omar spent weeks mostly lying in bed staring at Facebook, he also acknowledges that “we both knew I could make a phone call to get my passport back and leave, any time I wanted.” Finely, if sometimes bewilderingly, detailed, the book shines a humane spotlight on many of the people the author met along the way as well as on the role chance played in their fates, with particularly moving chapters on life within the Greek refugee camp. The narrative is scrupulous and often suspenseful.