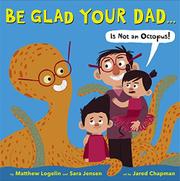 A pair of siblings explores the reasons why a dad of another species would be way worse than the dad they have now.

Even though their dad is sometimes grumpy and gross, at least he doesn’t leave balls of poop in their rooms as a dung-beetle dad might. And they should be glad he’s not a snake who might shed his skin in front of all their friends—that would be embarrassing. Saying “Boo!” to a skunk dad might result in some major stink, and an owl dad would keep them awake all night. Readers will get the idea after the first few spreads, but the shtick covers 16 animals. Chapman’s illustrations are done on vibrantly colored backgrounds, the characters and animals in full color, while props and extra details are only outlined in black. The typography gets in on the act: “Be glad your dad is not a TORTOISE, because e v e r y t h i n g  w o u l d  t a k e  f o r e v e r.” Like the words, a trail of melted ice cream stretches across the spread from the cone dad has scooped his child. While the characters’ faces express emotion, readers may be distracted by their noses, which are piglike and oddly dark against their otherwise fair skin. Three final pages tell “More about the animals in this book,” but these facts vary widely in the quality of the information they impart (it’s never explained why a quail dad would be boring, for instance).

This tries too hard to be funny…and misses.