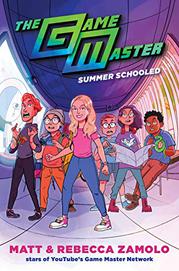 The six kids don’t know why they’re the only ones to show up for summer school today, but the empty building is seriously creeping them out. Can they just leave and enjoy the summer day? But something has happened to their class projects: Frankie’s “Leaning Tower of Cheese-a” has vanished, and so has Becca’s heirloom zoetrope, which is her nana’s prize possession. The classroom door slams shut and locks, and a voice over the loudspeaker tells them they need to solve puzzles if they ever want to leave the school or find the zoetrope. They’re herded by clues and shadowy figures around the building, where they’re repeatedly locked into rooms. Their antagonist escalates the challenges the more they solve: First it’s just a locked door with a code, then a chaotically furniture-filled gym, and eventually buckets of fake blood. Chapters alternate between the third-person points of view of Becca and Matt, the two White children. The other four kids—Vietnamese American Kylie; brown-skinned, bilingual Miguel (who has two moms); brown-skinned Danny; and nonbinary, brown-skinned Frankie—are just as central to the storyline, and there’s no clear narrative benefit to the alternating perspectives of the two blond children in particular. No questions are answered before the setup for the sequel. Most puzzles aren’t provided, so readers can’t join the solving process, and detail-oriented middle school readers will notice many incorrect details.