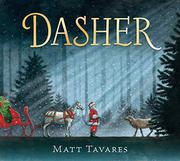 Nearly two centuries after “A Visit From St. Nicholas” originated Santa Claus’ “coursers” and “called them by name,” Tavares offers readers their backstory, centered on “a brave young doe named Dasher.” First, the frontmatter notes “a time…when Santa’s sleigh was pulled…by a single horse, named Silverbell.” Ensuing pages depict not a wintry scene of Santa and Silverbell but a parched landscape with a crowd of people peering at penned reindeer as part of the cruel J.P. Finnegan’s Traveling Circus and Menagerie. Illustrated details in clothing and material culture suggest a 19th-century American setting, but the focus is on the animals’ cramped misery. Though kind children provide solace through carrots and smiles, Dasher’s main comfort comes from her mother’s stories of a northern homeland with “crisp, cold air and cool blankets of white snow.” One windy night, the pen’s gate blows open and Dasher escapes. While following the North Star, she encounters Santa (depicted as a white-bearded white man) and a weary Silverbell and offers to help pull the sleigh. Tavares’ art is at its best in such magical scenes, which fairly beg to be made into Christmas cards, but the storytelling falters due to the ease with which the other reindeer escape when Santa grants Dasher her “best wish yet” and rescues her family.

Gorgeous illustrations make this one sure to fly off shelves “like the down of a thistle.” (Picture book. 3-8)