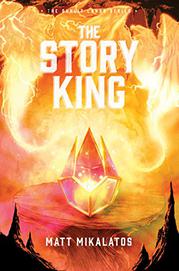 From the Sunlit Lands series, volume 3

The Sunlit Lands are unraveling.

A year has passed since the events of The Heartwood Crown (2019), and readers find the surviving characters scattered and still looking for answers. Madeline’s sacrifice broke all magic and bonds, the aftereffects of which the Elenil, Scim, and humans work to reconcile. Some attempt to rebuild, some fight for a new way, while others look for scapegoats. Jason Wu, Darius Walker, Shula Bishara, and Gilenyia will uncover the mysteries behind the creation of the Sunlit Lands and the terrible secret of the Elenil in order to overcome the pain of their personal tragedies. The setting of the story is heavily influenced by recent events and social debates: It weaves in themes and discussion around false truths and those who believe them without seeking further, the systemic nature of White privilege, extremism (the Vain Boys are a group akin to the Proud Boys), and the dangers of being Black in contemporary America—and even touches upon the problem of Asian Americans being treated like a monolith. Christian references are similarly a part of the fabric of the story. Though at times heavy-handed in expressing political views, the novel highlights many important historical and current issues within a fantasy-world context. This trilogy closer will best be appreciated by readers familiar with the earlier volumes.

A satisfying conclusion to a rich world of story.