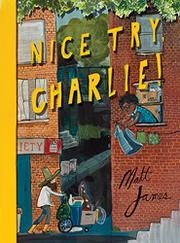 That’s apparently the moral of this Canadian import, in which Charlie, an itinerant collector, gathers stuff into his cart in his urban neighborhood and tries to reuse it. From her window, Aunt Myrtle spots a pie in a box on the sidewalk. Charlie wants to eat it but, reminded by Aunt Myrtle the pie’s not his, instead attempts to find the owner on his rounds. Charlie tries to help a girl retrieve her ball; he can’t, though he learns the pie isn’t hers. He fashions a birdbath from a tire—but the pie doesn’t belong to the birds nor to a kid who plays the tuba badly. Having failed to locate the pie’s owner, Charlie returns home. In a pat conclusion, Aunt Myrtle invites the community to gather for a pastry feast. This tale, narrated in present tense, meanders with Charlie; seemingly, its point is to keep trying. Fair enough, but some may feel it should also have strongly tried to dissuade readers from eating food found on streets, boxed or not. Loose, quirky, colorful illustrations, some in panels, depict broad overviews of a city; some are superimposed on photos of urban backgrounds. Dialogue is often set in colored boxes. Brown-bearded Charlie presents white and is casually attired in a green ten-gallon hat and yellow boots; other characters are racially diverse. Aunt Myrtle is a black woman who uses a motorized wheelchair. (This book was reviewed digitally with 12-by-17.6-inch double-page spreads viewed at 75% of actual size.)

Nice try, but there’s not much here to encourage repeat reads, even with pie.