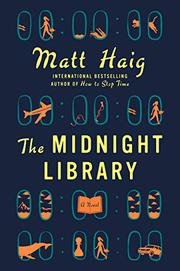 An unhappy woman who tries to commit suicide finds herself in a mysterious library that allows her to explore new lives.

How far would you go to address every regret you ever had? That’s the question at the heart of Haig’s latest novel, which imagines the plane between life and death as a vast library filled with books detailing every existence a person could have. Thrust into this mysterious way station is Nora Seed, a depressed and desperate woman estranged from her family and friends. Nora has just lost her job, and her cat is dead. Believing she has no reason to go on, she writes a farewell note and takes an overdose of antidepressants. But instead of waking up in heaven, hell, or eternal nothingness, she finds herself in a library filled with books that offer her a chance to experience an infinite number of new lives. Guided by Mrs. Elm, her former school librarian, she can pull a book from the shelf and enter a new existence—as a country pub owner with her ex-boyfriend, as a researcher on an Arctic island, as a rock star singing in stadiums full of screaming fans. But how will she know which life will make her happy? This book isn't heavy on hows; you won’t need an advanced degree in quantum physics or string theory to follow its simple yet fantastical logic. Predicting the path Nora will ultimately choose isn’t difficult, either. Haig treats the subject of suicide with a light touch, and the book’s playful tone will be welcome to readers who like their fantasies sweet if a little too forgettable.

A whimsical fantasy about learning what’s important in life.