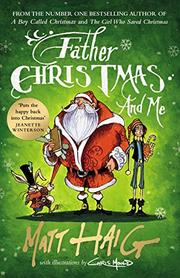 FATHER CHRISTMAS AND ME

It turns out that living with Father Christmas isn’t all cloudberry pie and jolly elves.

After escaping from the workhouse in The Girl Who Saved Christmas (2017), Amelia has joined Father and Mother Christmas in Elfhelm, the land powered by hope. Trouble is, she doesn’t quite fit in. As a human, she’s too large for the elf furniture, and she is terrible at school. For example, she just can’t fathom that “in elf mathematics the best answer isn’t the right one, it’s the most interesting” one. In this trilogy closer, trouble really starts when Amelia accidentally crashes a favored sleigh. The traitorous Father Vodol leaps at the opportunity to sabotage Amelia and the entirety of Christmas by setting up a newspaper called the Daily Truth in order to spread lies. At Vodol’s side are the Easter Bunny and his army of soldier rabbits. The Easter Bunny holds a festering grudge, his slogan being, “It’s time to make Easter great again.” When most of the elf population believes the fake news, Father Christmas, Amelia, and Mother Christmas must make manifest that amazing things can happen in an instant. This adventure is accompanied by cozily wonky illustrations, but militarized rabbits and the obvious political mirroring seem counterintuitive to the very heart of holiday mythology. All the human and humanlike characters are white.

Agenda wends its way throughout, but this Yuletide yarn often rises into the sparkling snowdrifts of fantasy.