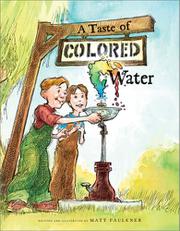 A TASTE OF COLORED WATER

Hearing tell of a fountain in the big city billed “colored,” two country children decide that they have to see such a marvel in this 1960s-era tale. LuLu and her cousin Jelly hitch a ride with Jelly’s father, and while he runs an errand, they do indeed find a bubbler with a sign right outside City Hall. Before the children can take a taste, though, they witness a violent confrontation between sign-carrying marchers and police wielding fire hoses. Another officer with a snarling dog pushes them away: “That water ain’t for you. It’s for coloreds!” Using crosshatching and loosely brushed watercolors, Faulkner creates a period setting with roadside billboards (complete with speed traps) and old-style cars. He adds pointed details like the words “Justice” and “Truth” carved into the City Hall steps and creates an engaging pair of fresh-faced young folk whose open expressions change to fright and then exhaustion as they make their way safely back home. To spark discussion, and perhaps even fill in clueless adults, the author closes with a frank explanation in tiny type and a plea to question “all forms of intolerance.” It’s a salutary theme, handled here with terrific appeal. (Picture book. 6-9)