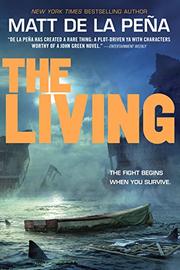 From the Living series, volume 1

Shy Espinoza’s summer job on a Hawaii-bound cruise ship has a lot going for it: decent pay, good tips, congenial crewmates and most of all, Carmen.

Both come from working-class Latino neighborhoods and have recently lost a loved one to Romero Disease, a fast-spreading pandemic. With a fiance on the mainland, Carmen won’t act on their mutual attraction. Shy’s haunted by his failure to prevent a wealthy passenger’s suicide and perplexed by the man’s mysterious last words. As Shy’s followed and questioned, his cabin ransacked, the mystery deepens. Soon, bigger problems loom on the horizon: A catastrophic earthquake has devastated the West Coast, generating a huge tsunami. Shy’s an appealing kid whose tough, impoverished upbringing has both limited his choices and shaped his character. His actions and emotions feel honest and earned, thereby lending authenticity and gravitas to the plot’s wilder leaps, deepening the narrative. Shy finds that focusing on work helps manage his fear. When he’s adrift on a leaky raft with Addie, a pretty passenger he’d dismissed as spoiled and shallow, their differences fade while their shared humanity gives them heart and hope. Disaster’s a powerful teacher, Shy’s adventures, the ultimate learning experience; it’s a harrowing, exhilarating ride right up to the cliffhanger ending. Relax: A sequel’s on the way.

An addictive page-turner and character-driven literary novel with broad appeal for fans of both.