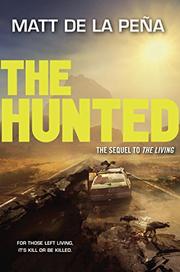 From the Living series, volume 2

After surviving the tsunami that sank their cruise ship, escaping an island harboring a deadly secret and enduring 36 days at sea, three teens and an adult reach what’s left of California—a quarantined, anarchic region devastated by earthquakes and a lethal, engineered pandemic.

Gangs control spheres of influence and prohibit travel. The dead are everywhere. Teens Shy, Carmen and Marcus suspect their families also perished. Shoeshine, the man who engineered their escape and their only guide, is a mystery himself. Inoculated against Romero Disease, the teens want to hunt for their families, but circumstances lead them to accompany Shoeshine east to Arizona, where the precious vaccine can be produced and disseminated to millions at risk. Shy and Carmen’s mutual attraction grows, but she’s engaged to someone among the missing. (Awkward sexuality in books for teens generally expresses a female perspective; Shy’s touching, funny account makes a welcome change.) Frustratingly, there’s no throughline to the plot; it doesn’t so much unwind as fall apart. Horrific discoveries (babies shot in a hospital, children killing and killed) lack the weight they merit; coincidence strains credulity. Latino protagonists are all too rare in teen books, but Shy and his cohort here feel more like placeholders than developed characters. Quests and goals are abandoned without resolution as if the author, having lost interest in his story midway, has left characters—and readers—to finish it themselves.

A disappointing sequel to the standout The Living (2013).