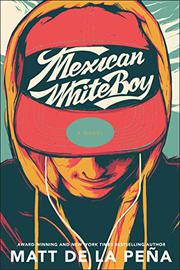 Angry with his Caucasian mother and feeling removed from his Hispanic heritage, 16-year-old Danny decides to spend the summer with his father’s relatives in an attempt to re-forge his identity. It’s a busy summer—he’s both running a pitching scam with Uno, a disillusioned interracial teenager, and falling in love with Liberty, a recently arrived immigrant. Danny’s sophomoric plan to find his missing dad reflects a balance between idealism and stupidity, especially since astute readers will quickly deduce the whereabouts of his father. While Danny’s self-inflicted wounds are physical manifestations of his identity crisis, de la Peña depends too heavily on the absent-parent motif for emotional justification. Danny’s internal voice occasionally grates, but the earnest emotions portrayed in his imagined letters to his father easily correct for this. Boisterous adult characters serve as outstanding foils for Danny and his friends, especially Senior, Uno’s domineering father, who is given to rodomontade. Though not an out-of-the-park follow-up to 2005’s Ball Don’t Lie, de la Peña blends sports and street together in a satisfying search for personal identity. (Fiction. YA)