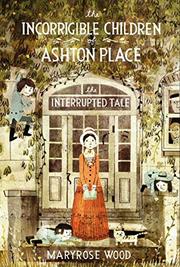 From the Incorrigible Children of Ashton Place series, volume 4

Amid much mention of cake and iambic pentameter, the Swanburne Academy for Poor Bright Females survives a challenge thanks to its star graduate, nanny Penelope Lumley, and her three wolfish wards.

Invited on her 16th birthday to deliver an address to her school’s residents and sundry others at a Celebrate Alumnae Knowledge Exposition, Miss Lumley travels to her alma mater with young Alexander, Beowulf and Cassiopeia Incorrigible. There, she discovers that malign “Judge Quinzy,” disguised and purportedly dead father of her employer, Lord Frederick Ashton, has taken over the board of trustees and instituted a repressive regime that includes changing the school’s very name to the Quinzy School for Miserable Girls. Why? It seems he’s after a certain old diary that holds clues as to why the Ashton men have been howling at the full moon for generations. As in previous episodes, Wood threads a boisterous gaslamp melodrama with instructional references (here to poetic meters) and broad but inscrutable clues. These seem to link the Ashtons, the Incorrigibles and Miss Lumley herself in some still-mysterious way. As always, details thrill: The school vet, Dr. Westminster, is first met successfully teaching chickens to dance the hokeypokey.

The history and nature of the Ashton curse at least begins to move out of the shadows at last. Still, much else remains to be illuminated in future sequels, which fans will be howling for.