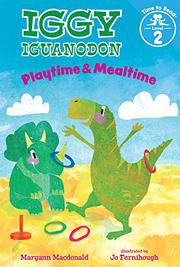 From the Iggy Iguanadon series

A little dinosaur navigates friendships and new foods in this early reader.

In “Playtime,” the first of this volume’s two stories, Mama tells Iggy that he’s to have a play date with Murka Macrosaur. Iggy’s afraid that she’ll be into girly things like princesses, but instead the two try a variety of different outdoor activities before settling on a ring toss that utilizes Triceratops Murka’s pointy nose. “Mealtime” sees Iggy eyeing a dinner of ferns with great suspicion. He’d much rather eat flowers, but even after Papa says he can’t have them until he tries his ferns, it takes Grandpa’s subtle intervention to convince the young dino to attempt something new. An opening key ranks the text as Level 2, defined as “Reading With Help.” With such words as Iguanodon, tagalong, Macrosaur, and triceratops on the first nine pages alone, that help will be sorely needed, especially for young readers who don’t already know their dinosaur names. Elegant writing does not mitigate this problem (“But Murka gets stuck in somersaults, the same as all triceratops”). Meanwhile, cumbersome, inexpressive art does little to distract from the text, and the absence of outlines around the uniformly green dinos makes compositions where bodies overlap particularly confusing. Finally, this may be set in the Cretaceous, but what really feels ancient are elements like an apron-wearing mom, a father as disciplinarian, and a grandfather who smokes a pipe. Companion title Bath Time & Bedtime publishes simultaneously.