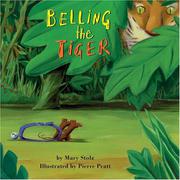 Decked out in handsome new illustrations, this 1962 Newbery Honor–winner (originally illustrated by Beni Montresor) features twin mice who discover that they aren’t as powerless as they thought. Dispatched to bell the resident cat by fierce lead mouse Portman, Bob and Ozzie screw their courage to the sticking place, steal a collar from the pet store, then flee aboard a departing ship to escape feline pursuit. The first creature they encounter upon disembarking is a sleeping cat of monstrous size—a tiger, who, rather than eating them, admires the collar they intrepidly slip onto its tail, shows them their effect on a passing elephant, then sees them back to the ship. This experience gives them the moxie to face Portman down, on their return home. Both Stolz’s rich language and her central theme have a timeless freshness, and Pratt’s impasto scenes of dot-eyed, square-nosed mice scampering through a very large world capture the tale’s danger, comedy, and lightly satiric touches expertly. Bob, Ozzie, and the cat are renamed; the otherwise unaltered text is quite a bit longer than usual for its new format, but today’s readers will be as delighted by it as their grandparents were. (Picture book. 7-9)