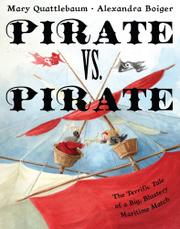 by Mary Quattlebaum and illustrated by Alexandra Boiger

In a battle of the sexes that’s all trappings and no center, Bad Bart (“the biggest, burliest pirate this side of the Atlantic”) and Mean Mo (“the maddest, mightiest pirate this side of the Pacific”) square off for the world title. After hardtack-eating, cannonball-throwing, arm-wrestling, treasure-counting and several equally trite contests end in ties the two inevitably fall for each other, “tie the knot” and sail off together with a fond “Aarrrr!” Aye, there be pirate talk aplenty here and splashy watercolors featuring much swashing and buckling—but pegleg and flowing blonde tresses aside, there’s nary a trace of difference between the two contestants. Alas, the combination of absurdity with strict internal logic that sparks such similar head-to-heads as Kevin O’Malley and Carol Heyer’s Once Upon a Cool Motorcycle Dude (2005), illustrated by Scott Goto or, most recently, Chris Barton’s Shark vs. Train (2010), illustrated by Tom Lichtenheld, is absent. Yo ho hum. (Picture book. 6-8)