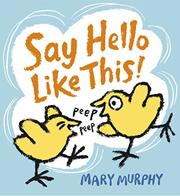 Toddlers and their adults nationwide will welcome with open arms this clever coupling of animal sounds and lift-the-flap elements.

In this book for children newly aware of the delights of saying, “Hello,” Murphy introduces a variety of familiar animals and describes their individual forms of greeting. “A dog hello is licky and loud… / like this! bow-wow-wow-wow!” Lift the flap, and two affable canines leap and prance, tongues every which way, their barks sprawling across the page. Most of the birds and beasts here are the usual animal-sound-book suspects (cats, frogs, chickens, etc.), though a pair of tip-tapping beetles makes for an unexpected and pleasing change of pace. Murphy’s thick, black outlines and bright (but never garish) colors will do well with large groups, and the half-page flaps that turn to reveal the various animal sounds will guarantee that this becomes a crowd pleaser. While few would argue that there is a dearth of quality animal-sound books out there, fewer still would fail to be charmed by Murphy’s smartly targeted book for the ankle-biter set.