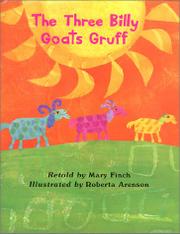 A classic fairy tale gets a facelift, with collage illustrations and a delightful repetitive phrase sure to rouse smiles. For these three brothers, the grass is greener on the other side of the bridge. So the littlest one sets out to cross the bridge, the home of the fearsome troll: “I’m a troll, from a deep dark hole, / My belly’s getting thinner. / I need to eat—and goat’s a treat— / So I’ll have you for my dinner.” As usual, the goat escapes, but only by extolling the virtues of his bigger brother. The second brother goes through the same scenario. Both brothers are now eating the greener grass on the other side of the bridge. But what excuse will the biggest goat give to the troll? There are no bigger goats than he. So he simply kicks him into next week and trots across the bridge. Using textured paper, Arenson (Manu and the Talking Fish, not reviewed, etc.) has created a wonderfully gruesome troll, complete with long nose topped with green wart, wild spiked hair, orange teeth, and purple toenails. He fairly pops off the page, but unfortunately, the rest of her collaged illustrations are comparatively two-dimensional—the bright pink, yellow, and blue seem flatter by contrast. Still, this perky, new—and less violent—edition will delight readers in their traditional quest for the greenest grass. (Picture book. 5-8)