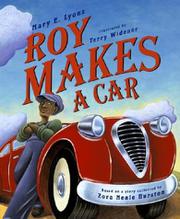 Lyons wheels out a terrific new tall-tale character in a Florida yarn based on a fragment collected by Zora Neale Hurston. Disturbed by the number of collisions around the town of Eatonville, which lies “somewhere west of Christmas and north of Boogy’s Corner,” legendary auto mechanic Roy Tyle builds a car that can sail over a tall Chevy sedan, under a low-slung Buick, and around anything else on the road. Not content with that, though, he welds golden wings onto his next “Roy-mobile” and flies it up past heaven’s bleachers so right smart that God buys it for His angels. Widener fills his Depression-era scenes with sleek roadsters and dark-skinned, strongly molded faces in rolling, Thomas Hart Benton–style settings, then closes with a small cameo of Hurston over a tantalizing account of her career as a folklorist. Roy’s working on a new project now; Lyons invites readers to take a peek, warning, “But don’t stand too close! That Roy Tyle is a wonder-making man. ’Tain’t no telling what he’ll try next.” (source note) (Picture book/folktale. 7-9)