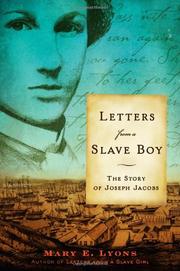 LETTERS FROM A SLAVE BOY

The Story of Joseph Jacobs

After the success of her Letters from a Slave Girl: The Story of Harriet Jacobs, Lyons here imagines the story of Jacobs’s son, Joseph, born, perhaps, in 1830, and journeying from North Carolina to New York City and New Bedford, Mass., and from there to a whaling ship and the gold mines of California. With only a few snippets of actual conversation and four events in Joseph’s life to go by, she weaves a fictional story around known facts and much research to create a series of letters to dramatize Joseph’s life. As with many novels-in-letters, this narrative often feels fragmented, the format stalling the drive of the narrative and relying on “Picture this” and “An Author’s Expedition” sections to provide context and coherence to the story. The letters often merely provide information to the reader, rather than giving voice to the character. However, they do demonstrate a satisfying growth in Joseph’s grammar and spelling and his awareness of the world he’s growing into, and offer a good resource for students learning about slavery and racism through the eyes of one fictional character. (Fiction. 12+)