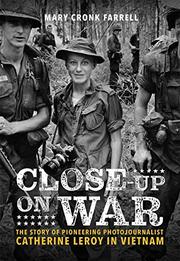 The Story of Pioneering Photojournalist Catherine Leroy in Vietnam

The story of a young Parisian woman who overcame gender barriers to take groundbreaking battlefront photographs during the Vietnam War.

Following the advice of famous combat photographer Robert Capa, Catherine Leroy was determined to get close to the action in Vietnam after being inspired by photos in French newspapers. In February 1966, at the age of 21, she arrived in Saigon as a freelancer, forging ahead despite her lack of experience. As she proved herself, Leroy was able to travel with and document troops as they moved through the harsh jungle conditions, staying alert for mines and booby traps. She received exclusive access to the first paratroop mission in Vietnam, parachuting with the troops and taking pictures all the way down. Her intimate photographs resonated around the world as they showed the vulnerability and sacrifice of young soldiers as well as the suffering of Vietnamese civilians. Farrell offers an insightful, well-researched, and detailed account of Leroy’s achievements as well as an overview of the history of Vietnam, the impact of the military conflict on Vietnamese people, and Americans’ changing perceptions of the war. Leroy’s letters and vivid examples of her photography enrich the work. This excellently written account will leave readers marveling at Leroy’s determination, bravery, and disregard for her own safety as she documented what was happening in Vietnam.

A riveting biography that puts an overlooked, award-winning female photojournalist into historical context.