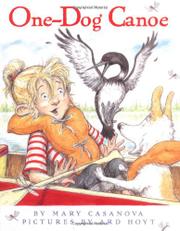 A girl sets out on a canoe ride and is joined by her dog, then a variety of animal passengers in Casanova’s (When Eagles Fall, p. 877, etc.) buoyant outing. Beaver is the first to climb aboard. “Can I come, too?” he asks. “There’s not much room,” the girl explains. “It’s a one-dog canoe.” But “with a slap and a swim, / Beaver scrambled in.” Hoyt, in his children’s book debut, plays with perspective, first depicting the eager beaver standing on a log then close-up, in the same position, in the front of the canoe. Casanova’s rhyming text employs a familiar cumulative twist as each animal requests a ride. “I doubt you’ll fit. It’s a one-beaver, one dog canoe,” she tells a curious loon. Then, to the wolf: “Maybe next time! It’s a one-loon, / one-beaver, one-dog canoe.” But the animals won’t take no for an answer and, each one larger than the last, enters the canoe in a most indelicate manner. Hoyt’s humorous illustrations convey the passenger’s uncertainty. A very funny spread depicts all the animals, including a bear and moose, improbably crammed into the canoe, its stern sinking below the surface. Finally, it’s the smallest creature (a frog) that upsets the boat’s balance and sends the entire crew overboard. Through it all, the girl remains good-natured. Hoyt’s closing vignette depicts the girl and her dog, alone at last, heading off for an evening excursion, a satisfying dénouement to a very hectic day. (Picture book. 3-6)