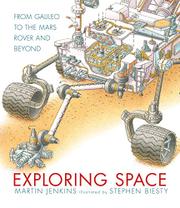 From Galileo to the Mars Rover and Beyond

Finely detailed cutaway views of spacecraft and satellites launch a broad account of space exploration’s past, present, and near future.

Jenkins begins with the journey of Voyager I, currently the “most distant man-made object ever,” then goes back to recap the history of astronomy, the space race, and the space-shuttle program. He goes on to survey major interplanetary probes and the proliferating swarm of near-Earth satellites, then closes with reflections on our current revived interest in visiting Mars and a brief mention of a proposed “space elevator.” This is all familiar territory, at least to well-read young skywatchers and would-be astronauts, and despite occasional wry observations (“For longer stays [in space], things to consider include staying fit and healthy, keeping clean, and not going insane”) it reads more like a digest than a vivid, ongoing story. Biesty’s eye for exact, precise detail is well in evidence in the illustrations, though, and if one spread of generic residents of the International Space Station is the only place his human figures aren’t all white and male, at least he offers riveting depictions of space gear and craft with every last scientific instrument and structural element visible and labeled.

A coherent if unexceptional overview of the subject given a solid boost by the visuals.