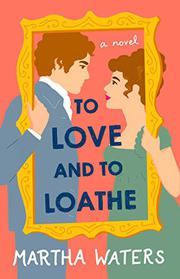 TO LOVE AND TO LOATHE

From the The Regency Vows series, volume 2

The second in a series of Julia Quinn–like sensuous rom-coms.

Diana Bourne decided at age 18 that in order to make her way in the world, a viscountess with no significant dowry had better marry money. And since Diana never really expected much more from the "addlepated" male gender, it really didn't matter who. Of course, her cheeks blush in the presence of Jeremy Overington, the Marquess of Willingham. But though he's blond and beautiful, he's also broke, a notorious rake, and a very poor candidate. Besides, when they're together, they spend all their time trading witty insults. Five years pass, and Diana, who succeeded in marrying well, is now Lady Templeton, a widow and—with her ample bosom and "elegant slouch"—the toast of the ton. But Diana's older husband, the viscount, was never much in the feathers, and she wonders how she can gain some new passionate experience. Diana doesn't want to marry again. Why would she? She's young, free, and wealthy. As romantic novels would have it, Jeremy also needs some help. The married mistress he just spurned has intimated that he might not be the lover he thought he was. Jeremy asks Diana to spend time at his country pile, Elderwild, with a bunch of fashionable 20-something couples and his grandmother, the outspoken Marchioness of Willingham. And would she mind giving him her opinion of his bedroom technique? Interestingly for romance, though Lady Di loves his kisses, she's critical of his finger work. And she guides him on how best to make sure his future lovers are not faking it. Through traded barbs and some overly frenetic plotting, the lovers come to understand that the uncaring faces they present to society are not the people they really are. Waters introduces an interesting rival for Diana, the desperate-for-marriage sister of an earl, who turns out to have different gender goals.

A try for a sexier Beatrice and Benedick that occasionally becomes overdone.