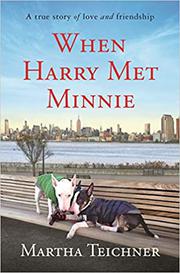 A True Story of Love and Friendship

A poignant memoir recounts how two dog lovers bonded over their shared affection for an aging bull terrier.

In July 2016, longtime CBS News and CBS Sunday Morning correspondent Teichner was shopping at a farmers market in her Manhattan neighborhood, accompanied by her “sleek glamor-puss” rescue bull terrier Minnie, when she met an old dog-walking acquaintance with an unusual request. His friend Carol, who lived alone aside from her 11-year-old bull terrier, Harry, was dying of liver cancer and desperate to find a new home for Harry. The author, whose dog Goose had died six months earlier, leaving Minnie and her owner bereft, was intrigued and agreed to meet with Carol. Circling each other, both suspicious, they worked into a deep friendship during the little time that Carol had left, all the while acting like “two overly protective mothers trying to arrange a marriage.” With humor and deep affection, Teichner recounts the play dates, sleepovers, doggie-cam observations, trips to a church “Blessing of the Animals,” where the two animals showed “zero desire to be blessed,” and all the other lead-ups to the eventual transfer. Emails between the two women add wry wit to the tale, which is definitely a New York story, with all the rich details of life on the sidewalks and streets, among dogs and dog owners. It's also a story of relatively privileged lives, despite Carol’s illness. Readers may be shocked by the thousands of dollars the two women routinely spent on their dogs or by the fact that Teichner has had live-in au pairs for her series of dogs for the past 30 years. But that privilege doesn't preclude loss, and the most touching moments of the memoir show Teichner delicately but firmly confronting the deaths of Carol and, later, Harry.

A heartwarming and heartbreaking story of friendship and grief.