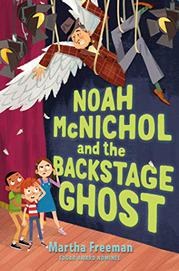 NOAH MCNICHOL AND THE BACKSTAGE GHOST

To be sure, “Hamlet, the Tale of a Gritty Prince Who Learns To Be Patient,” is what the inexperienced young players are handed—but hardly has oddly elusive new director Mike stepped in to sub for the annual event’s customary one (who has, with fine irony, broken her leg) than every script magically reverts to the Bard’s original and they find themselves plunged into a bloody, complicated, and much cooler scenario. But who is Mike, and how is it that he can apparently not only appear and vanish at will, but conjure elaborate sets and costumes out of thin air? Taking a cue from his erstwhile literary hero Nate the Great, Noah (aka Marcellus, Gravedigger One, Rosencrantz, and Fortinbras) sets out to solve this double mystery. Electrifyingly, Mike turns out to be a renowned stage director…who died in 2014. That’s far from the only twist that Freeman delivers on the way to a triumphant performance—and a rush of family revelations. Her characters quote Shakespeare at one another as immersive rehearsals lend hard-won insights into the play’s linguistic and thematic slings and arrows. Noah, who is Jewish, describes Plattsfield as predominantly White; there are a few students of color, including Fuli, a girl cast as Hamlet who emigrated from Nepal. Color-blind casting and race are explored to some degree.

The play’s the thing, on the boards and…beyond.