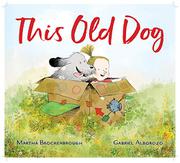 Don’t let the title fool you: The dog does not die.

The title introduces the protagonist simply as “old dog,” a gray and shaggy old mutt whose “bones are sore” but whose “heart is strong.” Brockenbrough’s measured text emulates his pace, extending standing, yawning, stretching, eating, drinking, and assisting with “clean up” into separate, deliberate steps. But even though old dog is slow, “the speed of life since the girl was born is fast fast fast.” He endures much-too-quick walks that make him limp and dreams of a friend who’ll play with him. In one heart-rending spread, old dog stands alone in the garden next to a blue ball nobody has thrown for him: “His heart thumps. His tail does not.” But when that baby girl (White, like her parents) begins to toddle—“all the way to him”—it’s clear he’s found his friend, someone who “stops to smell the grass” and who knows the importance of “a just-right rock.” Alborozo’s delicately lined cartoons invest old dog with enormous personality, the blur of his tail thumping the only fast thing about him. His postures as he stretches and slurps, dolefully stands, and “drifts to sleep in a stripe of sun” are perfectly doggish. Brockenbrough likewise captures his essence in her meticulously trimmed text. Old dog is never named, and the consistent omission of an article before “old dog” is both universalizing and sweetly particular.

As comfortable as an old dog snoring.