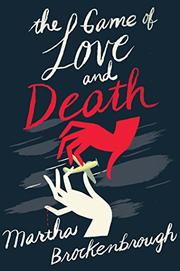 THE GAME OF LOVE AND DEATH

A lovingly realized Depression-era Seattle becomes the field of play for the latest round in the titular, age-old game.

In February 1920, Love and Death choose their newest pawns as infants: Love’s is Henry, a white boy of privilege (though influenza and grief rob him of much of it); Death’s is Flora, the soon-to-be-orphaned daughter of African-American jazz musicians. In spring of 1937, the game begins. Flora sings in—and actually owns part of—the family’s nightclub, but her heart is in the skies, where she flies a borrowed biplane and dreams of owning her own. Henry, a talented bass player, is poised to graduate from the tony private school he attends on scholarship with his best friend, Ethan, whose family took him in upon his father’s suicide. They meet when Henry and Ethan visit the airstrip where Flora works; the boys are in pursuit of a story for Ethan’s newspaper-magnate father. Brockenbrough’s precise, luscious prose cuts back and forth among the four protagonists, according each character equal depth, with Ethan playing a heartbreaking supporting role. The contrast between the youthful excitement of ardent Henry and pragmatic Flora and the ageless, apparent ennui of the immortals gains nuance as readers come to understand that Love and Death are not without their own complicated feelings.

Race, class, fate and choice—they join Love and Death to play their parts in Brockenbrough’s  haunting and masterfully orchestrated narrative.