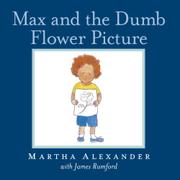 MAX AND THE DUMB FLOWER PICTURE

A crisp envoi from the late Alexander celebrates creativity in children while delivering a pointed message to prescriptive grown-ups. Certain that his mom would rather have an original drawing than a colored-in coloring page that his teacher forces on him, Max hides in the shrubbery outside school to create his own picture. When his four classmates see the result, they’re inspired to make unique flowers of their own—and all the moms (plus the teacher) turn out to be delighted. Working from the author’s sketches, Rumford depicts Max as a small, fierce redhead, suspends him and the other figures in white space as Alexander often did and adds a prose appreciation to go with the stylistic one. Opening and closing pages of flower paintings contributed by friends, family and associates (some of them familiar names) wrap this terse and lovely tribute to a veteran writer and illustrator whose works no self-respecting library should be without. (Picture book. 5-7)