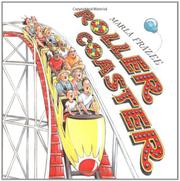 The most exhilarating amusement park visit since Kevin O’Malley’s Roller Coaster (1995) begins with a line of prospective riders, each drawn as a distinct individual; some look eager, or at least confident, but “at least one of them has never ridden on a roller coaster before, ever.” Children will soon figure out just who that might be as, after pulling back for a look at a glorious tangle of red tracks, Frazee fills up a train, then sends it zooming, swerving, dipping, and diving through pages of empty white space. At last it pulls up, and its passengers stagger off—except for one youngster, who has lost her initial anxiety, and “is planning to ride the roller coaster again . . . right away!” Capturing both the train’s breathtaking speed and a hilarious range of rider reactions with consummate skill, the artist who made Linda Smith’s Mrs. Biddlebox (2002) and Susan Meyers’s Everywhere Babies (2001) such delights is once again in top form. (Picture book. 5-8)