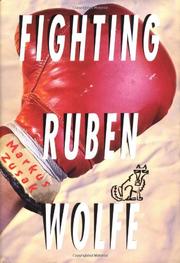 From Australia, Zusak debuts with an intense tale about boxing, brotherly solidarity, and searching for self-respect. The Wolfe family is on the skids, with Mr. Wolfe five months out of work, Mrs. Wolfe barely able to keep food on the table, older sister Sarah coming home drunk more and more often, and brothers Cameron and Ruben firmly tagged as troublemakers. When a schoolmate calls his sister a whore, Ruben reacts with such devastating speed and efficiency that a local racketeer makes a job offer. Soon Ruben and Cameron are both sneaking off every Sunday afternoon for low-paying and, needless to say, illegal prizefights in a grimy warehouse before bloodthirsty crowds. Though Cameron can give a good account of himself in the ring, he lacks Ruben's raw talent and ferocious concentration. But even as Ruben runs up a string of victories, he confesses to Cameron that he may know how to win, but not how to lose, not how to pick himself up off the floor and keep going the way Cameron and the rest of the Wolfes do. Ultimately, the brothers are forced to face each other in the ring, but Ruben, ever the brains of the outfit, finds a way to turn what might have been an ugly, divisive fight into a reaffirmation of love and respect. Zusak's eccentric language—a smell is "raucous," a pause "yawns through the air," a young woman has "eyes of sky"—gives Cameron's narrative a slightly offbeat air that suits the brothers' escapade: part lark, part a real effort (however misguided) to break from the unpromising path down which they seem to be going. The book closes on a rising note, with the brothers, and the whole Wolfe clan, closer than ever, showing real signs of regaining its feet. Engrossing. (Fiction. YA)