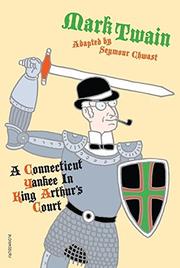 Chwast (Tall City, Wide Country, 2013, etc.) has made hay anachronistically adapting classic texts, whether adding motorcycles to The Canterbury Tales (2011) or rocket ships to The Odyssey (2012), so Twain’s tale of a modern-day (well, 19th-century) engineer dominating medieval times via technology—besting Merlin with blasting powder—is a fastball down the center. (The source material already had knights riding bicycles!) In Chwast’s rendering, bespectacled hero Hank Morgan looks irresistible, plated in armor everywhere except from his bow tie to the top of his bowler hat, sword cocked behind head and pipe clenched in square jaw. Inexplicably sent to sixth-century England by a crowbar to the head, Morgan quickly ascends nothing less than the court of Camelot, initially by drawing on an uncanny knowledge of historical eclipses to present himself as a powerful magician. Knowing the exact date of a celestial event from more than a millennium ago is a stretch, but the charm of Chwast’s minimalistic adaption is that there are soon much better things to dwell on, such as the going views on the church, politics and society, expressed as a chart of literal back-stabbing and including a note that while the upper class may murder without consequence, it’s kill and be killed for commoners and slaves. Morgan uses his new station as “The Boss” to better the primitive populous via telegraph lines, newspapers and steamboats, but it’s the deplorably savage civility of the status quo that he can’t overcome, even with land mines, Gatling guns and an electric fence. The subject of class manipulation—and the power of passion over reason—is achingly relevant, and Chwast’s simple, expressive illustrations resonate with a childlike earnestness, while his brief, pointed annotations add a sly acerbity. His playful mixing of perspectives within single panels gives the work an aesthetic somewhere between medieval tapestry and Colorforms.

Chwast and Twain are a match made in heaven.