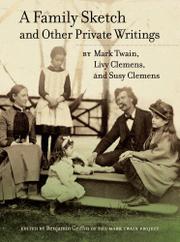 A FAMILY SKETCH AND OTHER PRIVATE WRITINGS

A collection of writings by Twain, his wife and his eldest daughter that depict the day-to-day life of one of America’s most beloved writers and his family.

The six essays that comprise this volume form a unique biography of the Clemens clan during the time of its greatest thriving. The most complete piece, “A Family Sketch,” begins the book. Twain wrote it after the death of his eldest daughter, Susy, in 1896 but never published it. The author introduces readers to his three daughters and several family servants, including a resourceful black butler named George and an Irish wet nurse who “whooped like a Pawnee…swore like a demon…and drank great quantities of strong liquors.” The essay that follows, “A True Story,” was published in fictionalized form in the Atlantic Monthly in 1874. Like “Sketch,” it focuses on portraiture—in this case, of a long-suffering but ever cheerful black servant named Aunt Rachel. The two following pieces are more anecdotal in nature and offer a series of informal observations on the often silly and outrageous but sometimes remarkably wise words and actions of Twain's daughters. His wife, Livy, adds her voice to the mix in the fifth essay. Comprised of a series of journal entries she kept while the family summered at their Elmira, New York, home in 1884, the piece records the quotidian events of her family. Rounding out the collection is the essay, “Mark Twain” by Susy Clemens. Incomplete and deliberately unedited for spelling errors, Susy speaks with disarming honesty about her famous father and his flaws, which included a “peculiar gait” and teeth that were not “extraordinary.” These essays are refreshing for their at times draftlike quality. At the same time, that they are so “private and unpolished” limits their appeal.

Of interest to Twain scholars and die-hard fans but not to a general audience.