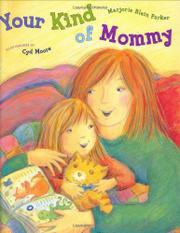 YOUR KIND OF MOMMY

A mother describes the myriad ways she could shower her little one with affection if they were any number of animals. From the eight-armed embrace of an octopus mommy to the plaintive song of a timber wolf, Parker relies upon sometimes whimsical, sometimes evocative depictions to convey the depths of a mother’s devotion. The gentle repetition of the verses is perfectly suited for shared read-aloud storytimes. Although each verse begins with mother’s supposition of “If I could be . . . ,” each stanza ultimately becomes an affirmation of the human mother’s love. Moore’s full-bleed, full-color illustrations work equally well at depicting both the animal mothers and their human counterpart. She skillfully incorporates into her illustrations the parallels between the animal mother/child habitats and activities and those of the human pair. Featuring a bright medley of hues and brimming with details, Moore’s artwork will prove engrossing for young readers. The literary equivalent of a cozy hug, Parker’s tale is bound to be a popular choice. (Picture book. 4-8)