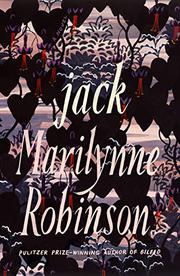 A sometimes tender, sometimes fraught story of interracial love in a time of trouble.

“I have never heard of a white man who got so little good out of being a white man.” So chides Della Miles, upbraiding John Ames Boughton at the opening of Robinson’s latest novel, set in an unspecified time, though certainly one of legal racial segregation. Jack hails from Gilead, Iowa, where so many of Robinson’s stories are set, and he has a grave waiting there that he seems in a headlong rush to occupy. He drinks, he steals, he wanders, he’s a vagrant. Now he's in the Black part of St. Louis, an object of suspicion and concern, known locally as “That White Man That Keeps Walking Up and Down the Street All the Time.” Della is a schoolteacher, at home in Shakespeare and the classics. Jack is inclined to Milton. He is Presbyterian by birth, she Methodist and pious—but not so much that she can’t laugh when he calls himself the Prince of Darkness. Both are the children of ministers, both smart and self-aware, happy to argue about poetry and predestination in a Whites-only graveyard. The arguments continue, both playful and serious, as their love grows and as Jack tries his hand at the workaday world, wearing a tie and working a till—and, more important, not drinking. Pledged to each other like Romeo and Juliet, they suffer being parted more than they do having to deal with the disapproval of others, whether White or Black, though Della's father, aunt, brothers, and sister all separately tell Jack to leave her alone, and once, when Jack's landlady finds out that Della is Black, she demands that he leave. The reader will by this time doubtless be pulling for them, though also wondering how the proper Della puts up with the definitively scruffy Jack, even if it’s clear that they love each other without reservation. Robinson’s storytelling relies heavily on dialogue, moreso than her other work, and involves only a few scene changes, as if first sketched out as a play. The story flows swiftly—and without a hint of inevitability—as Robinson explores a favorite theme, “guilt and grace met together.”

An elegantly written proof of the thesis that love conquers all—but not without considerable pain.