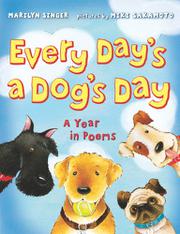 EVERY DAY'S A DOG DAY: A YEAR IN POEMS

A chronological collection of 30 short poems follows four canine pals and their young owners through a calendar year, in an earnest but uneven effort that tries too hard to please, rather like an overly enthusiastic Labrador.

The dogs and their owners enjoy seasonal activities and holiday celebrations over the year, with outdoor play in snow and sand and participation in obedience classes, a dog show and a parade. The poems are written in first person with one of the four dogs as narrator, and it is sometimes unclear which dog is speaking when all four dogs are shown in the illustration. The poetic formats are pleasingly varied in length and rhyme scheme and include a few gems such as haiku and parallel introductory and concluding poems. While some poems are sharply focused and cleverly rhymed, others don’t scan exactly or use rhyming pairs that stretch too far (don’tcha / won’tcha). Busy, detailed illustrations follow the poems closely, depicting humorous interactions among the four dogs and cheery views of the four children who own the dogs. The illustration for a St. Patrick’s Day poem includes an oddly prominent wall plaque with a famous Irish phrase of welcome, but there is no translation to help readers.

These cute dogs and kids don’t break any new ground in the crowded field of dog-themed books for children.