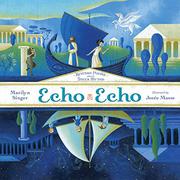 Reverso Poems About the Greek Myths

Picking up where they left off with their “reverso” renderings of classic fairy tales (Follow Follow: A Book of Reversos, 2013, etc.), poet Singer and illustrator Masse take on Greek myth, choosing some of the most famous legends to explore from multiple perspectives. In 2010, Singer created the provocative reverso form, in which—not unlike an extended palindrome—a lyric poem presents a portrait and then recasts it backward, line by line, in a companion poem. The complicated fates of the dozen mythic figures portrayed here, among them Arachne, Midas, Demeter, and Persephone, lend themselves particularly well to this reflective form, and Masse’s gorgeous acrylics, richly stylized in blues and gold, effectively capture the dualistic nature of the reverso form. Here, curious Pandora, forever blamed for unleashing untold evils into the world when she “opened that darn box,” gets a sympathetic reprieve when the story flips: “She let loose those evils, / but / she didn’t collect them. / She gets the blame. / No matter that / it might have been great Zeus’s game.” The myth of “Eurydice and Orpheus,” though, again hinging on succumbing to desire, here relies rather too heavily on the narrative note at the bottom of the page to convey the tragic plot to young readers.

In all, though, a visual and interpretive feast bringing timeless tales to a young audience.