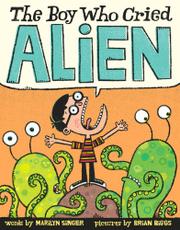 THE BOY WHO CRIED ALIEN

Young Larry is a known liar, so no one believes him when he says an alien spaceship has landed in a nearby lake. “How corny, quaint, and uninspired. / I can’t be fooled by stuff that tired,” says someone who looks like he might be the mayor. And so, let the wordplay begin. Singer’s poetic architecture is highly variable—from long lines (which can be a bit of a slog) to short lines where words fly like popcorn (“ ‘Nonsense— / They’re jokesters, / hoaxsters. / Those fakes cannot / harm me…’ / ‘Holy pastrami— / call out the army!’ ”) to unsyncopated stutter steps. Even the aliens get in on the rhyming, their cockamamie verbiage—“Lel’w peek ruo eyes npeo / dna esu ruo tiws”—turning out in the end to be anagrammed English. The story, which involves Larry getting to know the aliens and learning that their planet admires the art of quality fibbing, plays second fiddle to the narrative pyrotechnics, and the words, in turn, tend to outshine Biggs’ artwork. While the characters have their measure of personality, mostly via gaping mouths, flapping tongues and beady eyes, the colors are fairly anemic, making the story even less substantial.

Inventive, musical rhyming pulls this effort, while the story and illustrations watch from the sidelines.