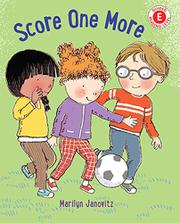 Sam advocates for his friend, May, by allowing her to play on his soccer team after she’s been told she cannot join in.

The game continues and everyone takes a participatory role. “Lin kicks the ball. // They run. / They pass. // We block. But we do not get the ball. // Lin kicks again. / She gets it in. ‘Score!’ they yell.” Short declarative sentences, just one or two per page, with a controlled vocabulary build to provide suspense and excitement from each team’s perspective. The carefully crafted first-person text repeats a core list of words in a variety of sentences that move the action along, allowing more-proficient new readers to feel accomplished. Sam and May eventually get the ball back to succeed in a winning score. “I need to score one more. / It is up to me. May yells, ‘Kick it in, Sam!’ // But I pass the ball to May. / I will let her try. // May kicks. // May scores! // We win!” Simple, finally outlined cartoon characters include a multiracial cast—Sam presents white while May has brown skin and straight, black hair—in varying soccer poses that serve as good picture cues for the action described. The modest story is poignant in its underlying message of inclusion and supportive friendship.

Teamwork and camaraderie are strong factors in any soccer game.