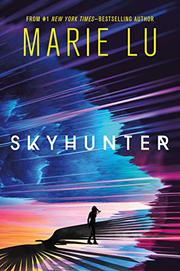 From the Skyhunter series, volume 1

A group of young soldiers defend their home against the evil Karensa Federation.

Talin is a Basean refugee in Mara, treated with xenophobic cruelty by many but recognized for her skill by her battle partner, Corian, and friends Rooke and Jeran. The capture of a former Federation fighter named Redlen with magnificent, strange abilities forces her into new territory and life-altering decisions. Redlen exposes details about the Federation’s genetically engineered army of Ghosts, zombielike creatures, leading Talin and the rest to hatch a desperate scheme to infiltrate their stronghold and sabotage their production—against explicit orders. Their mission and its aftermath help Talin understand more about her role in Mara and her reasons for defending a nation where she is often persecuted. In this cinematically imagined dystopia, Talin uses sign language to communicate since early trauma in her homeland at the hands of the Federation resulted in the cessation of her speech. In a deftly plotted first-person narrative that is both expansive and detailed in its depiction of the setting and includes quick-moving battle sequences, Talin’s trajectory is convincing. In a few instances, her earnest realizations about her own motivations can feel a bit pat, but this is a mostly nuanced and poignant story that is left wide open for a welcome sequel. Characters have a range of skin tones; one male character is in love with another man.

An exciting, layered, action-filled tale with a cast of sympathetic characters.