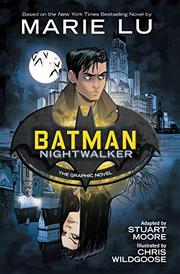 A pre-Batman Bruce Wayne takes his first strides toward becoming the Caped Crusader.

In this graphic adaptation of the novel by the same name, 18-year-old newly minted billionaire Wayne wrestles with increasingly adult issues: how to control his newfound power in managing his deceased parents’ fortune, facing the unknown once high school ends, and an intense call to defend the city he loves. When a nefarious group known as the Nightwalkers descends upon Gotham City, reigning terror upon the rich, Bruce begins his first foray into vigilantism. Unimpressed by his attempts, he is reprimanded by the GCPD and sent to work at Arkham Asylum, where he befriends enigmatic inmate Madeleine, a Nightwalker with a dark past. Like most Batman tales, the lines between good and evil are nebulous, and as Bruce struggles with issues like economic inequality, he learns he must define those boundaries himself. With electric pacing and dynamic black-and-white illustrations punctuated with bright splashes of yellow, Moore’s (The Zodiac Legacy, 2017, etc.) adaptation of Lu’s (Wildcard, 2018, etc.) novel is a visual delight with all the cinematic panache one would expect from the superhero franchise. Focusing upon Wayne before he fully adopted his Batman persona, this makes for a fine jumping in point for both seasoned fans and newcomers alike. Wayne presents as white, but secondary characters are ethnically diverse.

A worthy addition to the expansive Batman corpus