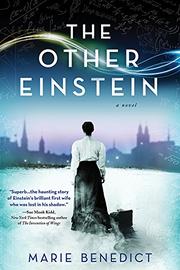 What if Mileva Marić, Albert Einstein’s first wife, contributed more to the theory of relativity than anyone knew?

Afflicted with a congenital hip defect, Mileva grows up convinced she will always be disdained and will never marry. Her only hope for happiness lies in physics; indeed, she sees God in the details of the mathematical universe. Fortunately, her father supports her unconventional destiny. Soon after moving to Zurich to study at the Swiss Federal Polytechnic, Mileva has not only gained a circle of like-minded girlfriends, but also attracted the attention of a disheveled classmate: Albert. Despite Mileva’s reticence, Albert quickly ensconces himself in her life, joining in spirited musical evenings previously reserved for her girlfriends, pulling her into intellectual debates at cafes, and ultimately seducing her into his bed. Enthralled by her first love, Mileva wonders whether marrying Albert is wise: what will become of her own dreams? Benedict’s debut novel carefully traces Mileva’s life—from studious schoolgirl to bereaved mother—with attention paid to the conflicts between personal goals and social conventions. Aligning the scientific accomplishments with the domestic tribulations of 19th-century life holds promise. Yet from the moment Mileva falls for Albert, she submits easily to the expectations both society and, surprisingly, Albert hold for women. Narratively, too, Benedict douses the fire and passion expected from such an iconoclast as Mileva Marić. She certainly builds tension each time Mileva bends a rule to advance her relationship with Albert. Yet even these first forays into collaboration reduce Mileva from Albert’s intellectual equal, and often superior, to the shadows: Albert easily convinces Mileva to ignore her doubts about his fidelity, establishing the pattern of sacrificing Mileva’s astonishing intelligence to social harmony.

An intriguing, if thin, reimagining of one of the strongest intellectual partnerships of the 19th century.